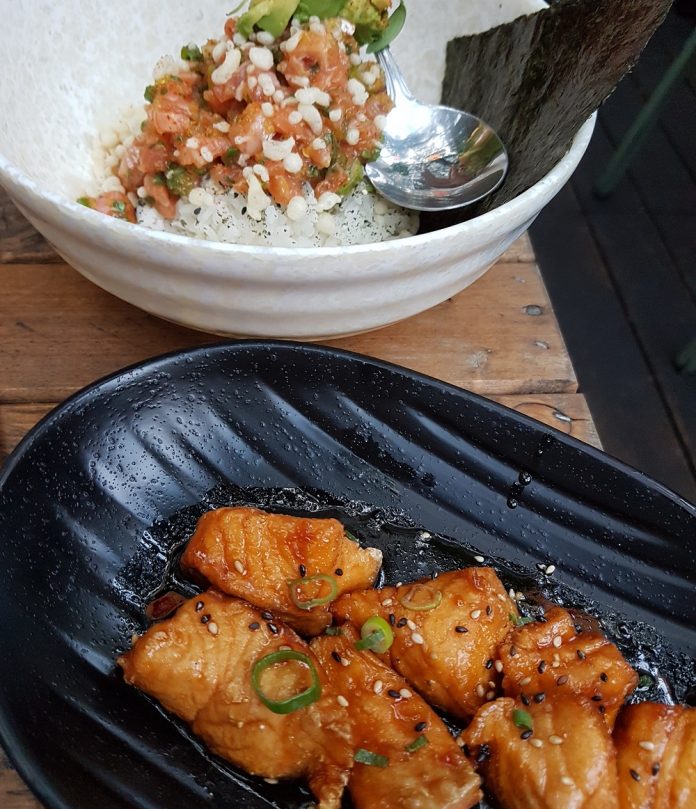 In the last few weeks, my foodie friend and I were on a mission. Before she went away for her trip to Japan, we would try some of the best Izakaya in Montreal and pick our favourite. In case you don’t know: an Izakaya is a Japanese pub where people go to drink (a lot) and eat, typically to unwind after work. The meal is usually made out of shared plates similar to tapas.

To determine which restaurants we should try, I consulted my fellow bloggers. Since there is much hype around Izakaya at the moment, the “best of” lists weren’t hard to find. From list to list, there were a few recurring names. Big in Japan, Saka-ba and Kyo, for example, were very common. However, the restaurants that appealed to us the most were Biiru, Imadake, Ichigo Ichei and Kinoya. These are the ones we tried.

“Biiru” literally means beer in Japanese. This is the Izakaya to go to drink, have fun with your friends and, for the cool kids, take Instagram pictures. In summer, you can do that under the sun on the cozy patio. That patio, with its lanterns and cool drawings on the walls, is a very nice place to be on a hot day. In winter, bundle up inside and raise your glass. But, first, you will need to find the place. Biiru is one minute away from St Catherine Street in downtown Montreal. However, some of the charm of this place comes from the fact that you kind of need to know it to find it. It’s situated on a quiet street where people don’t usually go and you can only spot it from afar by a small Japanese flag. 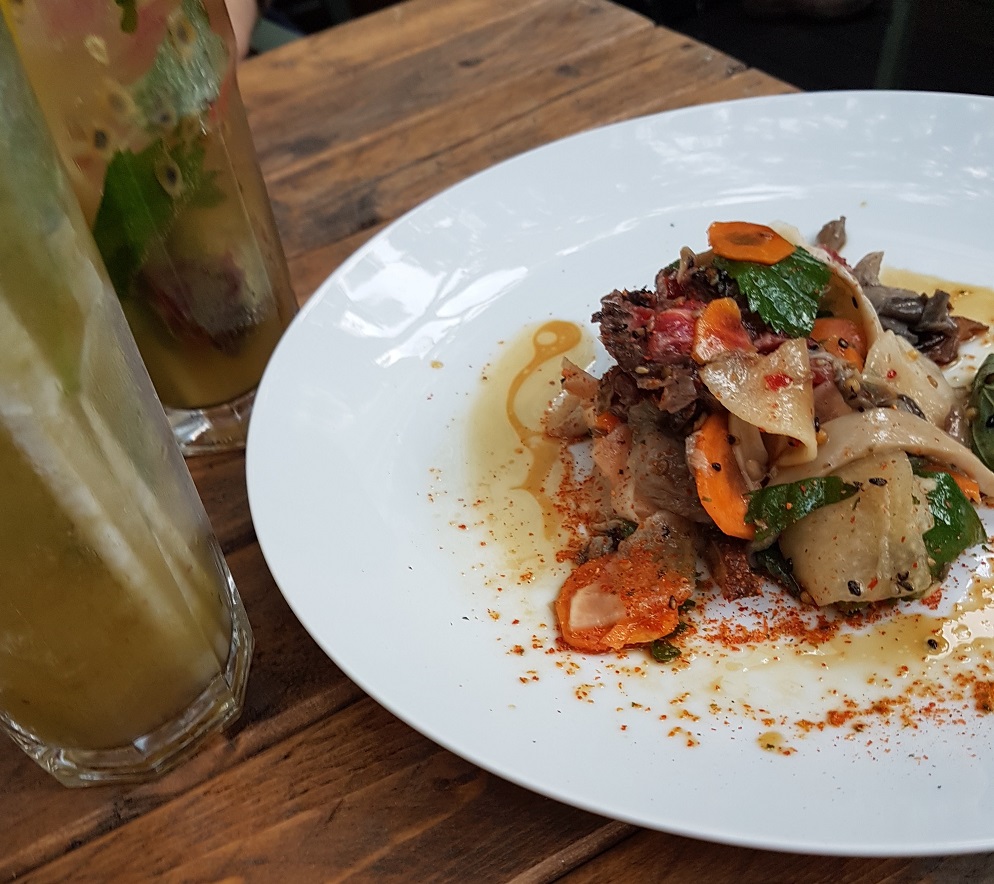 When you do come in, know that the most hyped items on the menu are the octopus dishes, mushroom okonomiyaki (pancake) and the fancy drinks. Before we came in, we had very high hopes for this pub because of all the wonderful things we had heard about it. However, I have to say that we were a bit dissatisfied. All the Izakaya in this list cost around 50$ per person for a drink and a generous meal. At Biiru, we felt we didn’t get quite enough for this price. Out of what we ordered, the drinks weren’t very tasty, the beef tataki lacked seasoning, and the candied salmon was disappointing. Nothing was terrible, but overall it was underwhelming. 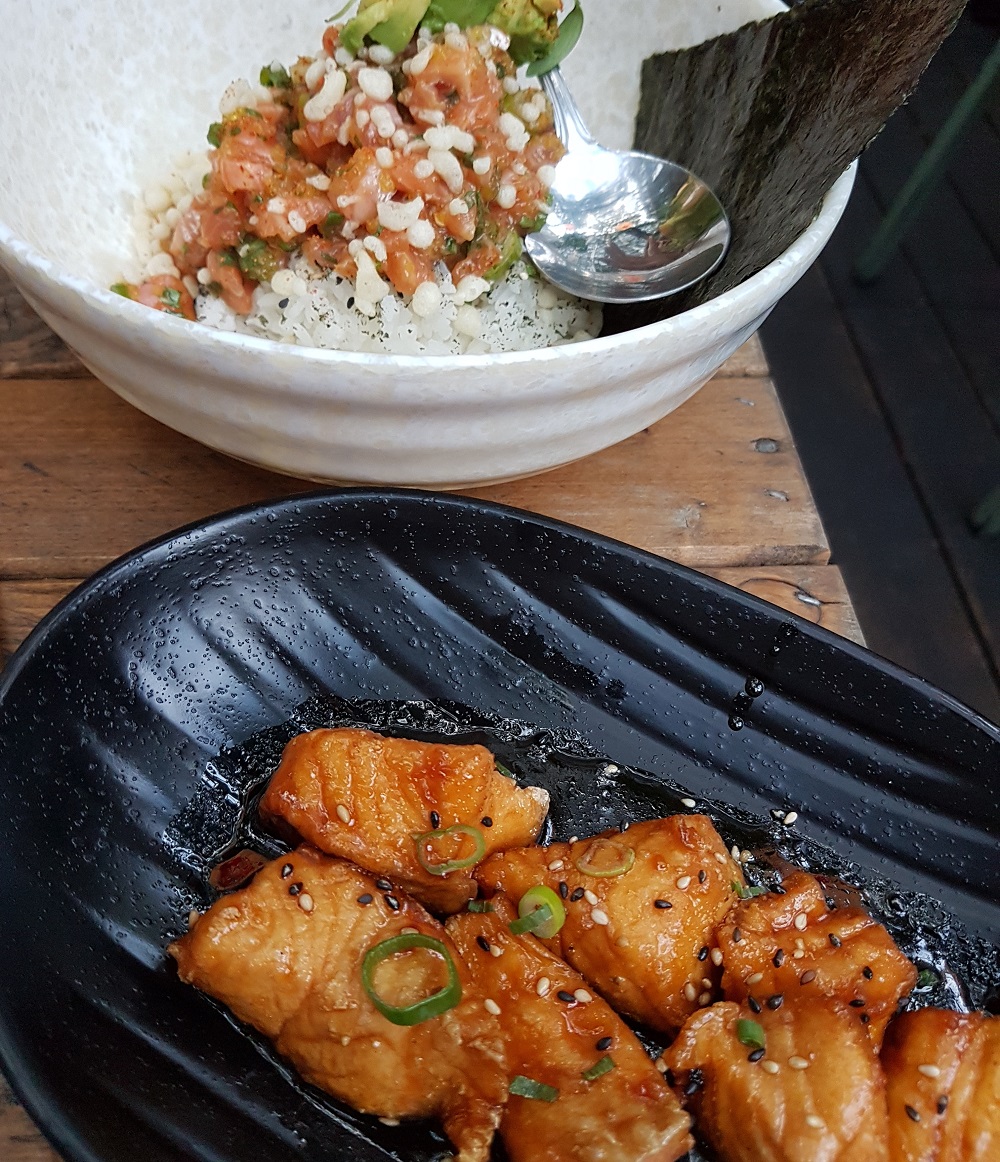 Imadake’s reputation is all about party: fun, crowded and loud. It’s not the place to go for a romantic evening. Instead, go with lots of friends and order Sake Bombs (a drink that involves a shooter of sake, beer, shouting and slamming on the table). Whether you’re a large group or just two, it’s best to have a reservation. If not, you risk being served so fast you won’t have time to chew. Yes, they will be eager to get rid of you. Somebody else wants your table. With the drawing on the walls, the shouting when someone comes in and the school girl’s skirts, this Izakaya establishes itself as hip and playful. The fact that the waitresses all wear school girls’ skirts “doesn’t add anything to my dining experience,” to quote my sister. However, service was very efficient, so I won’t complain*. 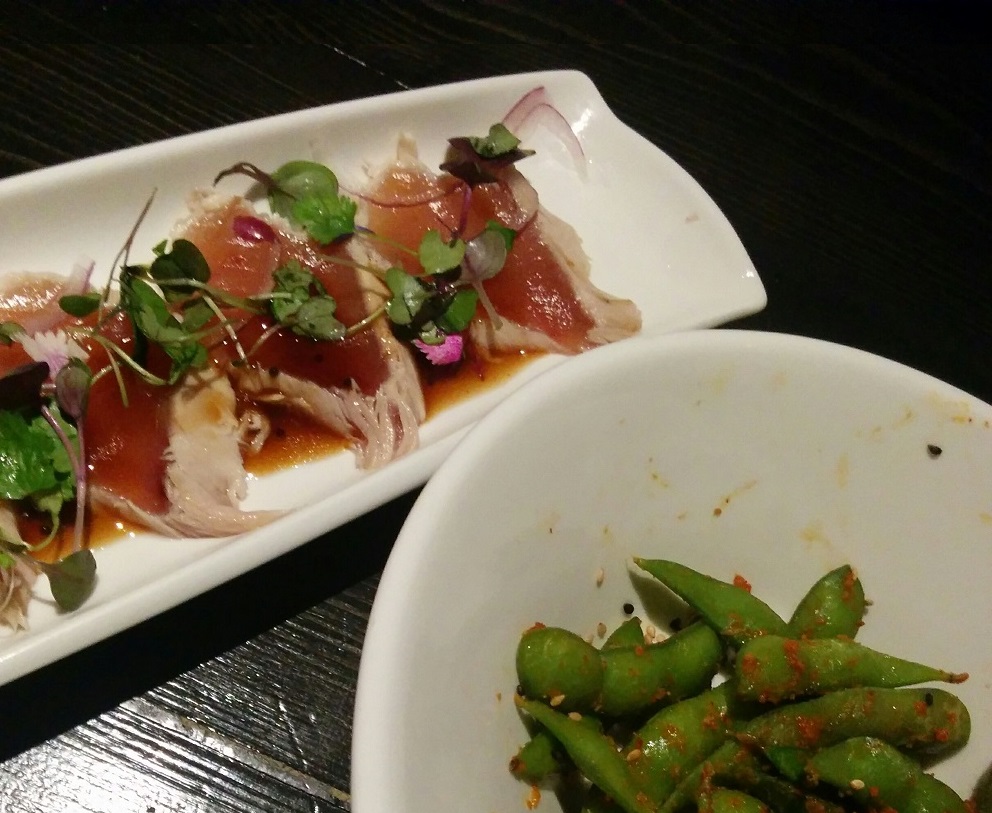 Now, let’s get back to what’s important: the food. There are a lot of options on the menu. If you need time to look at it, do like us and order spicy miso edamame to snack while you make your choice. Also, a cocktail helps. I drank a delicious Hello Kitty (this sounds so wrong). Overall, the food was great. I highly recommend the tuna tataki, the crispy and salty chicken skin and the yakiniku beef steak, for a special experience (you cook it on a hot stone at the table).

*Except that I will. Okay, so I said that the waitresses were all in short plaid skirts. Well, as an ”equivalent,” waiters are wearing … wait for it … cargo shorts. I’m not complaining for feminist reasons. It’s just that who, ever, thought that cargo shorts were sexy? Seriously?! 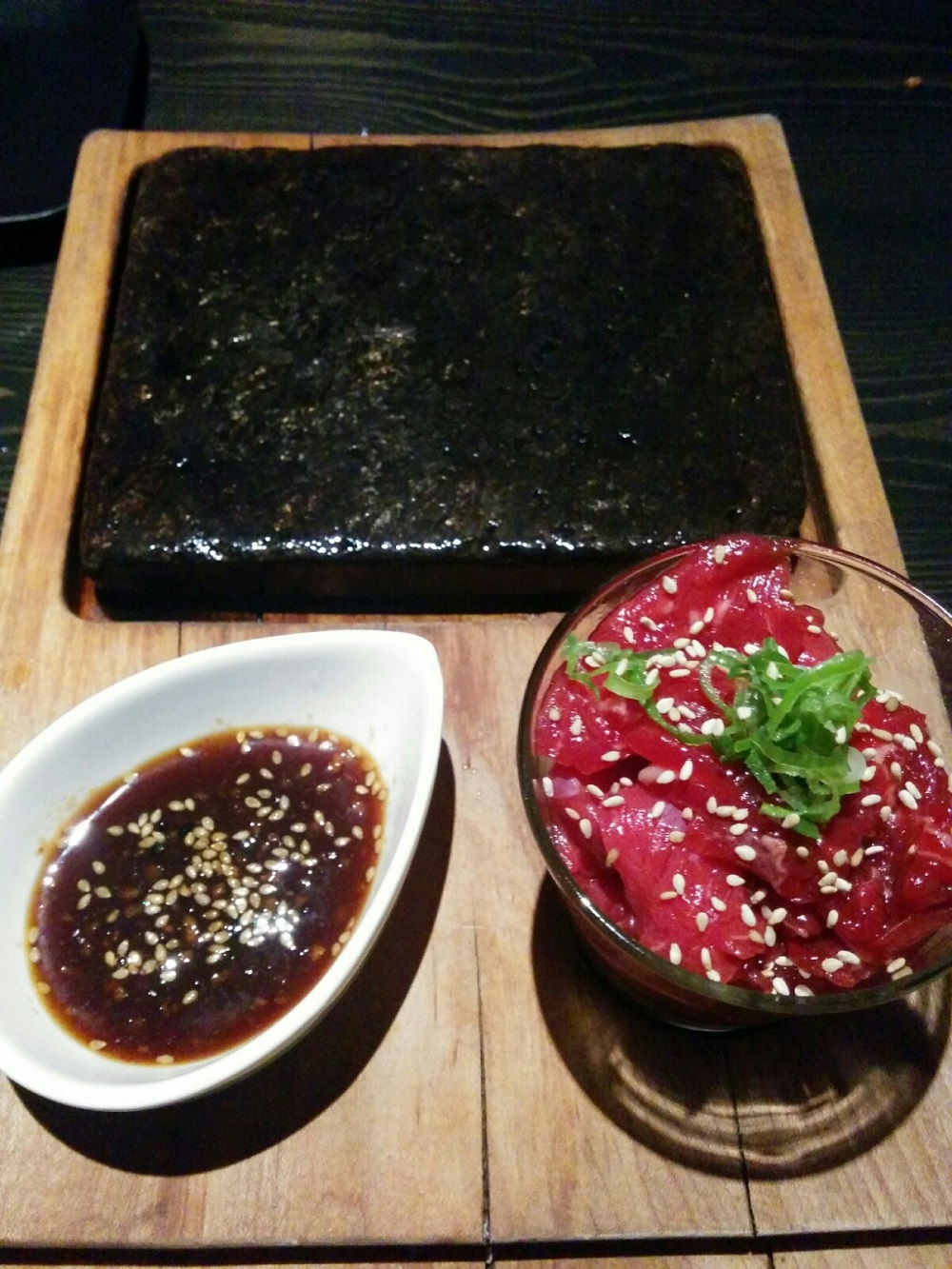 The term “Ichi-go Ichi-e” refers to the Japanese expression “one time, one meeting.” It’s the idea that you have to treasure the moment spent with others. (It’s also the title of the movie Forrest Gump in Japan, just so you know…) Walking toward the restaurant, I couldn’t understand why, but I had a weird sense of déjà vu. It was only when we entered that I realized why. I had been there before, except not for Ichi-Gi Ichi-e. This restaurant shares its space with the great ramen house Yokato Yokabai. This was a good start. 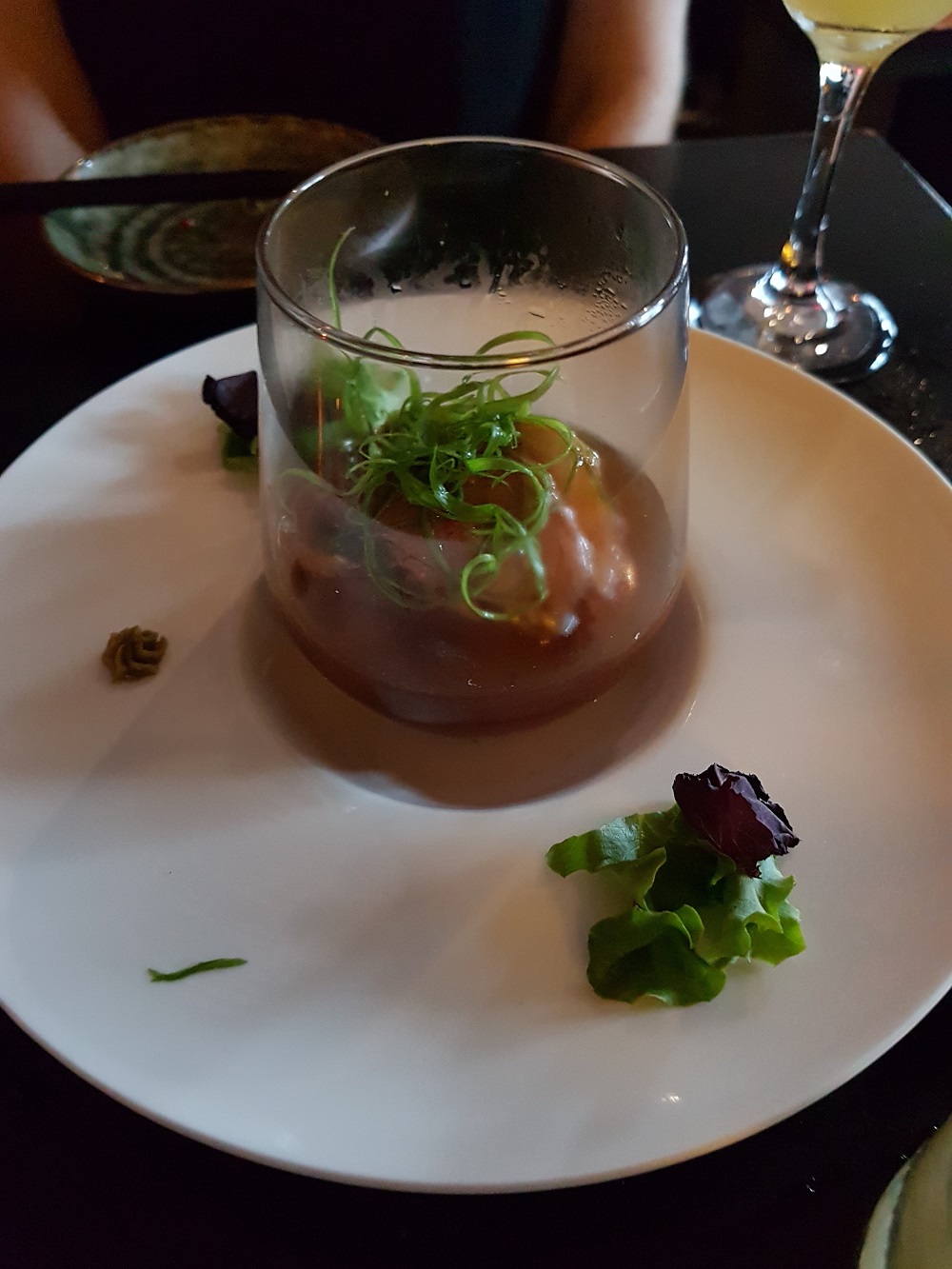 The look of the dishes at Ichi-go Ichi-e is amazing. The yuzu marinated-tuna plate was presented vertically. The mackerel is torched at the table. And the simmered duck is served in a glass full of smoke that smells enticing. It soon became clear that compared to the other Izakaya, Ichi-Gi Ichi-e was the fanciest. Luckily for us, the taste of the dishes matched their theatrical look. It was absolutely delicious. I especially liked the duck and the tuna, and will go back for them any day. 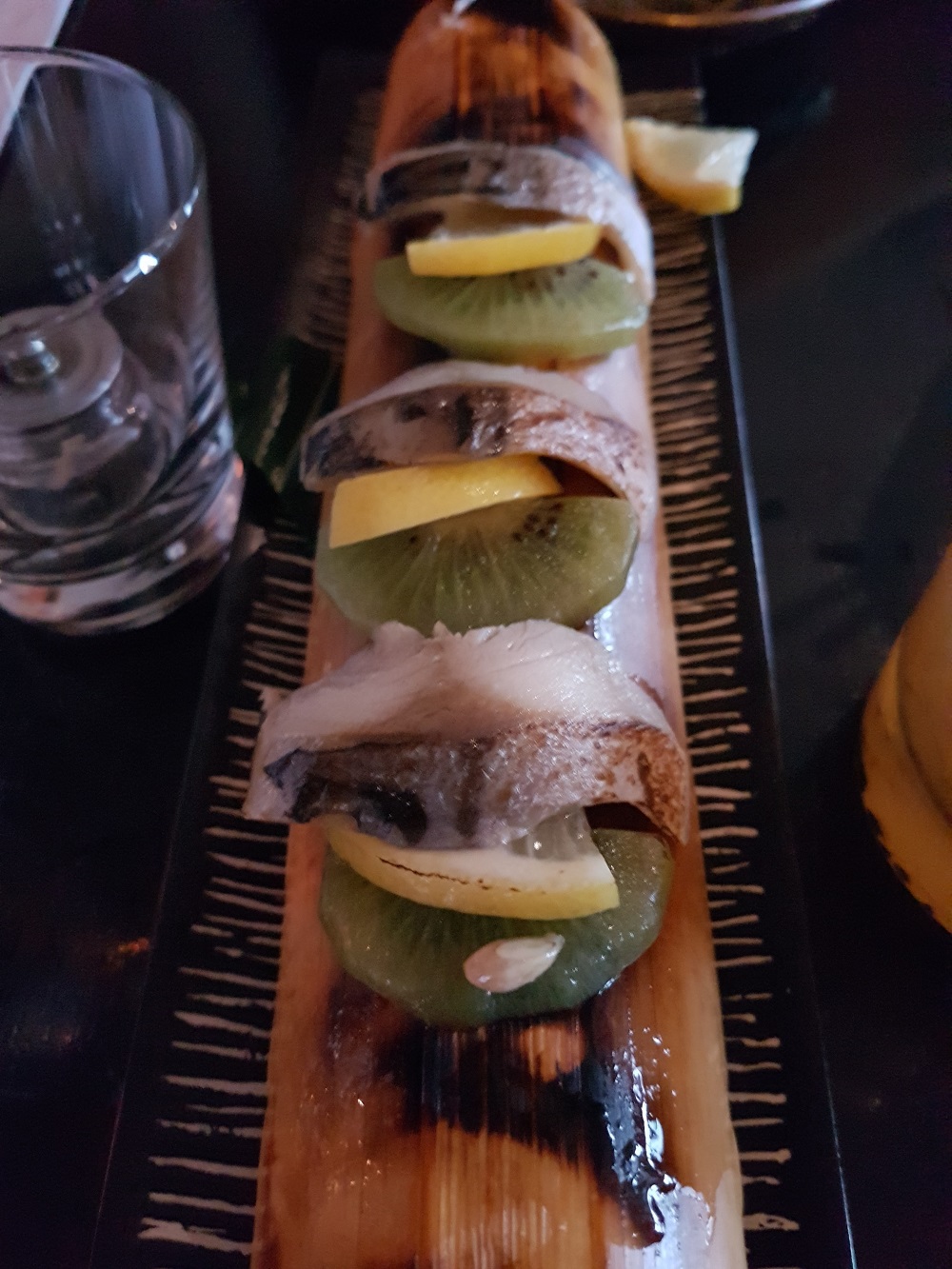 As far as decor goes, you don’t get much more exciting than Kinoya. All angles and wood panels, the interior is so great it actually won a prize for its design. I have to say it kind of felt like I was in a wooden box, but a cool wooden box. And this box has a great party vibe complete with sake bombs and its consequential yelling. As for us, we were thrilled by the original cocktail menu. Torn between cocktails that sounded absolutely delicious and a choice of three funky sangria, we finally chose to share a pitcher of yuzu sangria. A nice Japanese twist to a classic girls’ night drink, this was really yummy.

As for the food, we had red tuna with avocado and a poached egg, duck carpaccio, juicy fried chicken, shrimp tempura, grilled scallops and Saikoro steak. Are you salivating yet?There were a lot of interesting choices on the menu. Some of the dishes we tasted, like the Saikoro steak and its rich sauce, were very good. However, other dishes, like the red tuna and the duck, were a bit bland. We expected punchier flavors, more sauces: something to take these dishes from “fine” to “wow, I want to eat this again.” 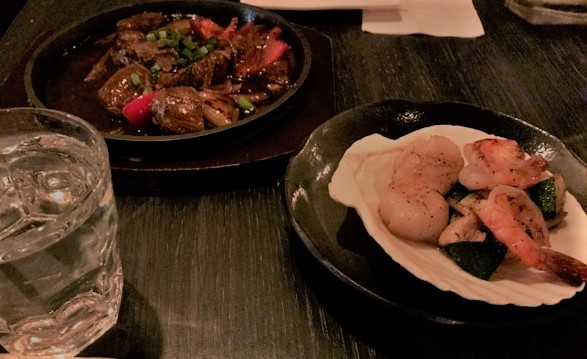 AND THE WINNER IS…

Ichi-Gi Ichi-e! Out of the four Izakaya on this list, this is the one I’m most eager to go back to. I think that the warm ambiance, the beautiful decor and the delightful food of this Japanese bar all make for a very special evening, perfect for enjoying your moments with others.

The close second was Imadake. The food is delicious, but service can be too brisk sometimes. If you are not careful, they might make you eat, pay and leave in 45 minutes. BUT, for a birthday party with friends, this might be the best pick. It’s a fun and original place to party a bit.

I will definitely try more Izakaya in the future. I will tell you if Ichi-go Ichi-E loses its place on the podium 😉 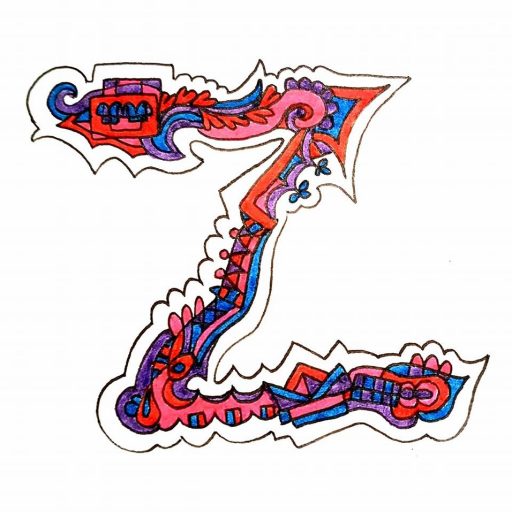 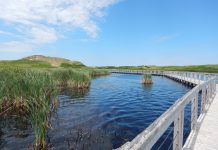 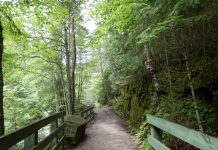 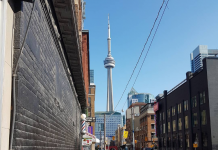 Tips for your Roadtrip in Ontario (Part 1)

I Bought Tahini, Now What?